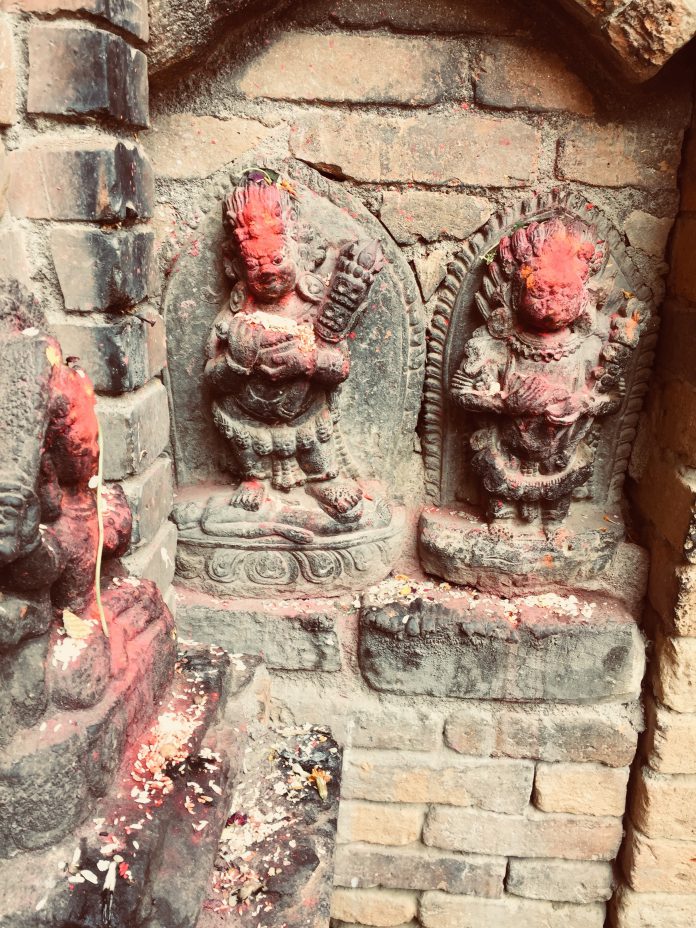 The official language in Nepal, as the name suggests, is Nepali. This language spoken in the Himalayan region comes from ancient Indian Sanskrit and means something like”the language of the gods”. Nepali is a language that is closely related to Bengali and Hindi. The typical expression of the national language is “Nepalese” or “Nepali”. The area in which the language has spread in the course of its creation extends from Nepal to India (mainly the state of Sikkim) via Bhutan to Burma. Nepali is spoken by about 17 million people.

The spoken Nepali has three main forms of politeness that are used by the locals – a high form, a middle and a lower form. As a traveler and foreigner, you should be careful to avoid mistakes as courtesy to locals. If you are approached with a polite (higher) form, this always shows respect and should be answered accordingly. Now we will delve into the religions of Nepal. 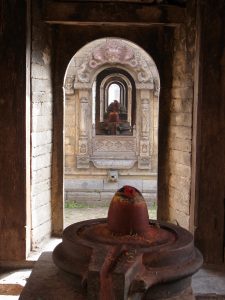 The religion of the Nepalese Religion is a big issue in the land of the mountains. For the Nepalese, religion plays an immensely important role, if not the most important one – besides the popular rice, of course. Religion is as important to people as the water arteries of the Himalayan mountains that feed the rivers. The different rites and customs of the religions are deeply rooted in the social life of the Nepalese. The intensity of the rites and customs, celebrations and parties, is reflected in the colourful holidays and varied dances.

Up there, in the land of the enchanting mountains, Buddhism exists peacefully and close to Hinduism. These two main religions of the mountain population form a cornerstone of social life. Here is a truly lived religion that influences daily life and thereby forms a living coexistence, the roots of which go back to ancient times. Religious rituals are very important in Nepal. The blending of faiths goes so far that one easily gets the impression that all people belong to each of the religions there. Cosmopolitanism, tolerance and hospitality also play an important role in Nepal.

Hinduism forms the main faction of the country with 80 percent, followed by Buddhism as the second most popular with about 15 percent, even though Nepal is the birthplace of Buddha. After that, with almost 4 percent, Jainism and Christianity form the smaller religious branches. All religions coexist peacefully alongside one another.

The proportion of Muslims in the country is just under 1 percent. The Nepalese are open to all religions, friendly, peaceful and tolerant and that is what makes the country not only extraordinary, but also particularly peaceful. 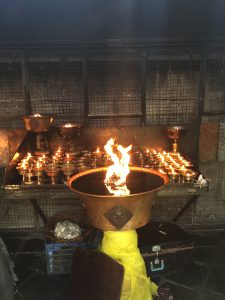 If you look very carefully, Buddhism is actually not a religion because it does not start from a God. Rather, it is a philosophical teaching about morality and aims at the dissolution of the ego. This peaceful religion was created by Siddhartha Gautama, who, sitting under a tree, experienced enlightenment as a Buddha.

Buddhism developed around 500 BC. The Buddha’s knowledge, the four noble truths, form the heart of the teaching. However, Buddhism evolved over time, creating two additional main paths: Mahayana Buddhism and Theravada Buddhism.

After the death of Buddha, around 480 BC, his followers spread his recognized and preached messages in Asia. The birthplace of the Buddha is located in the southern part of Nepal and has become an important place for Buddhists and also Hindus. 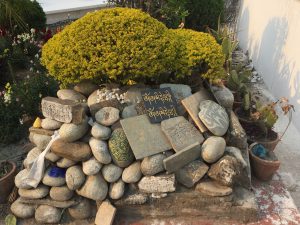 Siddhartha’s birthplace in southern Nepal is called Lumbini and is now an important pilgrimage site. The exiled Tibetans, on the other hand, who once had to flee Tibet, live in different regions in Nepal. Vajrayana Buddhism (Tibetan Buddhism), which is a further development of Mahayana Buddhism, has mainly spread there. In regions such as Dolpo, Khumbu, Helambu, Mustang and some other areas of the Himalayan region, where the Tamang live, these forms of Buddhism are very pronounced and widespread. 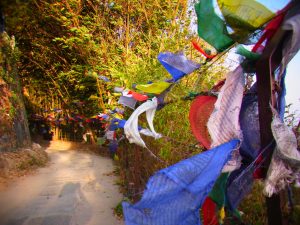 Monasteries, prayer flags, stupas and stone collections with the compassion mantra “Om Mani Padme Hum” can often be found here. Of course, everywhere in the country, the Nepalese prayer flags decorate the landscape and blow the prayers around the world. The spiritual head of Buddhism is clearly the holy Dalai Lama. For a short time Buddhism had been somewhat forgotten when Hinduism became more prevalent around 200 AD.

With almost 4 billion followers, Hinduism is the third largest religion in the world. In the meantime, science assumes that Hinduism originated around 4000 years ago from various beliefs, rites and sects. If you look at religious literature, Hinduism is like a library from infinitely different times. This godly religion has grown over thousands of years.

Hindu is a word from ancient Indian Sanskrit and means something like Sindhu = “river”. The Indus is also a river that winds its way from Pakistan to India from the Himalayas and also means “river”. In the course of development, the word “Hindi” became established for language, and Hinduism for religion. The most striking feature of Hinduism is without a doubt the diversity of the gods. 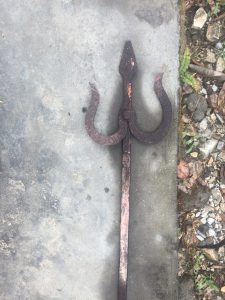 They belong to Hinduism like prayer flags to Buddhism. The expressions of deities can be quite different. Rather, the gods and deities that shape Hinduism in Nepal live as a kind of active force in the midst of mortals. Everyday life with the deities is like everyday rice. Whole shrines, temples, rooms and dormitories were created only for gods.

Popular deities of Hinduism are the elephant god Ganesha, Lord Shiva, Lakshmi, Kali and an infinite number of other deities and their incarnations. Bhairava is a very important god in Nepal, because he is a part of Shiva, who represents destruction, and is portrayed by mythology as the true patron god for Nepal. For Bhairava in particular the festivals dedicated to dance are held, which can sometimes last for several weeks or days. 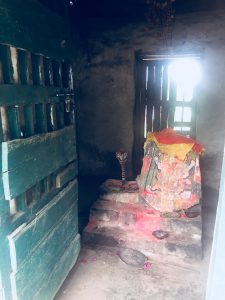 Hinduism assumes that all souls will be reborn infinitely, with no end. These include 3 basic practices: puja (a type of worship), cremation of the dead, and following the different caste systems with all their rules, as well as reading Hindu teachings and scriptures.

The puja is also a special prayer in honor of the gods. From small pujas at home to large, colorful temple pujas, whether in the early morning in front of popular sanctuaries with flowers, incense, light, tika and rice or in honor of Shiva in a small setting – there are countless ways to hold pujas.

The coexistence of Buddhism and Hinduism

Nepal has a very long history of religion, mostly due to it being the Buddha’s birthplace and the establishment of the Hindu kingdom. At the present time, these religions have mingled and their specific rites and customs live peacefully side by side. 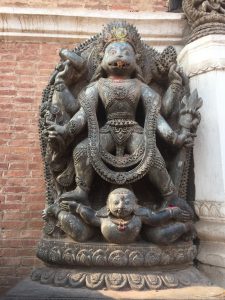 Here Buddhism and Hinduism form a distinctive coexistence in which it is normal to see Hindus and Buddhists praying at the same time. Buddhism can be practiced and lived in very different ways, with all types complementing and respecting each other wonderfully.

This religion probably finds many followers in the West because Buddhism has many answers to life’s fundamental questions. The mind transforms lifestyle and attitudes towards the positive. Buddhism teaches everything up to dealing with nature and itself. The more practices integrated into life, the more everything can be transformed from suffering into bliss. 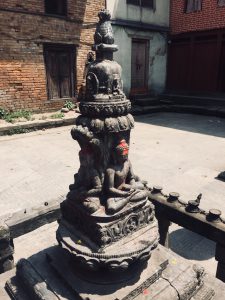 The cycle of rebirths (samsara) where Hinduism and Buddhism meet is infinite. Both aim to break through samsara. Overcoming this cycle (spiritual liberation / moksha) and karma determine our path through the seemingly endless journeys of rebirths.

Every act, whether good or bad, bears fruit. The fruits of past existence determine subsequent life, and so on. This is why Hinduism deals with poverty and misery quite casually, since they are believed to be signs of karma from past lives and have themselves been indebted to previous lives.

Religion is inextricably linked to everyday life in Nepal and the god Bhairava is a fine example of how Hinduism has merged with Buddhism over time, since in the world of Tibetan Buddhism, Bhairava has also received great attention. Nepal – a melting pot of religions. 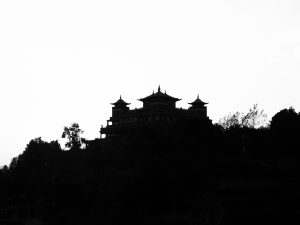 In this sense: a lovely Namaste!