In 2018 I will dedicate myself intensively to the completion of a children’s yoga book, which I will publish at the end of the year. Namely, I came up with the idea for a children’s yoga book when I was living in Nepal in 2012 , just before conducting the social health camp “Nepaltoothpath Project”  The video material I collected during the camp sowed this vision. One year later, in 2013, I started a children’s yoga teacher training in Germany and I held countless children’s yoga classes. These experiences profoundly inspired my children’s book.

The children’s yoga book will feature many unique selling points. It is sustainable at many levels. It proves to be ethical, environmentally friendly and – through its connections  to the Karmastad project –  it aims at promoting  education , consciousness  and motivation for children.

The school construction in Nepal is going to begin with the sale of the book this year. The project is connected to the book, and aims at linking cultures and encouraging similar projects. We are all one and we have only one earth. I see myself as a light-carer, a heart-worker  and a visionary. My intention is to provide a model and inspire other subjects, be they individual travellers or start-up companies (whose number is growing steadily these days.

Successful people earning as much as possible in the shortest time are always regarded as very respectful by society. However, economic and social success rarely coincide with the ethically and morally good. The economic greed of the 21st century has reached its very limit. If all the Inhabitants of the world continue to exploit its resources as they are currently doing, soon we will have no earth left for the next generations. I believe it’s time to start entirely rethinking our lifestyles. 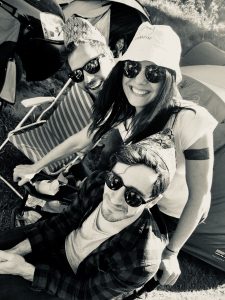 Karmapfad wants to suggest a way out of this scenario. The project / work does not aim to receive any prestigious award, but to create good feelings  and let something wonderful grow. Education is this wonder: happy and educated children enrich the world a million times more than a single businessman earning millions a day. Life is a cycle and it requires balance. With Karmapfad, my wish is to inspire a new future perspective, especially for big  companies and multinationals, which take way too much from this planet and never give anything back.

To leave something good in the world

Karmapfad is newly born, but has great potential. Companies and multinationals can help projects such as Karmapfad to rebalance the economic and environmental cost they create when producing  their goods, while furnishing a more decent image of themselves in front of their clients, public opinion, and their own employees .